Fred's People,
The New Order of the Stone (Determinant)

"Above and Beyond" (Determinant)
Binta is a character in Season Two of Minecraft: Story Mode. She first appeared in "Below the Bedrock". She is voiced by Kimberly Brooks.

Binta is shown to be a helpful and fair person. She is also kind, and is willing to risk her life to help others, evident by her helping Jesse fix the portal back to the Overworld. However, she is strict about honors and rules, which is seen when she tells Jesse, "No one enters [Fred's house] unless they win the contest". She also is seen to have an aggressive side to her personality in "Above and Beyond" when knocking out one of Romeo's guards in Beacontown and reveling in it.

"...have been returned. Festivities will close with a fireworks display as usual. And don't forget to sign up for our "Faithful Friends of Fred" trivia competition for a chance to win ONE NIGHT in Fred's house!"
—Binta to the people of The Underneath. src

"Welcome to Fred's Keep. My name is Binta."
—Binta to Jesse's Gang, introducing herself. src

"She hasn't been seen down here in a very, very long time. You're more impressive than you seem."
—Binta to Jesse about Xara. (Determinant) src

"If you're really from up there, then you must have a way back. Take us with you... above the Bedrock."
—Binta to Jesse. src 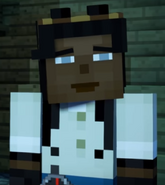 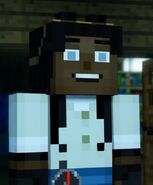 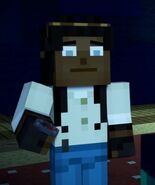 Binta at the Oasis.

Binta outside of the Old Order's temple (determinant). 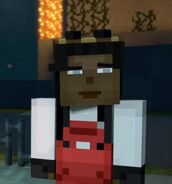 Binta in "Above and Beyond" (determinant).

Binta after knocking out a guard (Determinant)

Binta behind a guard

Binta staring angrily at the guard she knocked out