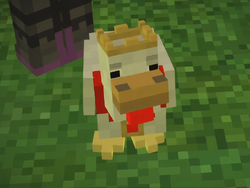 "Well, there goes the Eversource. Off to cluck and peck at seeds for the rest of its valuable life."
—Ivor to Jesse's Gang. src

Benedict, a.k.a. The Eversource, is a character in Minecraft: Story Mode. She first appears in "​Order Up!​".

The Eversource is a chicken with the ability to lay spawn eggs of passive, neutral, and hostile mobs. According to legend, she once belonged to The Old Builders; however, in "Order Up!", she currently belongs to The Founder of Sky City.