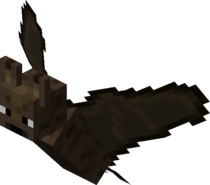 A Bat in Minecraft

1.4.2
Bats are Passive Mobs in Minecraft: Story Mode. They are small creatures that have the ability to fly, and are treated like pests by the characters.

Jesse with a bat on his face

A Bat resting in the Graveyard.

The animation used for bats flying in Minecraft
Add a photo to this gallery
Retrieved from "https://minecraftstorymode.fandom.com/wiki/Bat?oldid=170483"
Community content is available under CC-BY-SA unless otherwise noted.