Minecraft Story Mode Wiki
Register
Don't have an account?
Sign In
Advertisement
in: The Order of the Stone, Items, Determinant Items,
and 3 more 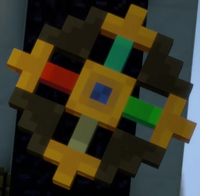 "Take this amulet, and guard it with your life!"
—Gabriel when giving Jesse the amulet. src

The amulet is designed so that when a member of the Order of the Stone is nearby, his/her respective color on the amulet glows.

The amulet can be placed inside a tracking device in The Order's Temple to create colored beams that shine onto a map. These beams show the exact locations of The Order members in The Overworld.

The amulet cannot work in other dimensions such as The Nether or The End. It is unknown whether or not it functions in other worlds, such as The Mansion world.

Each color present on the amulet represents a different member of the Order of The Stone:

The Amulet being used in the Tracking Device.

The Amulet inside Soren's Mob Grinder.

Soren The Architect holding the Amulet during the intro sequence in Episode 1.

The amulet falling through the end in the episode 3 trailer.

The amulet after falling down a hole. 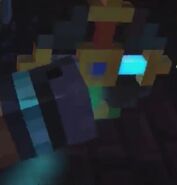 Lukas and Jesse fighting over the amulet.

The Amulet on the item frame. 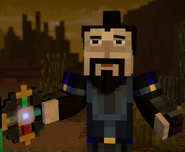