Minecraft Story Mode Wiki
Register
Don't have an account?
Sign In
Advertisement
in: Characters, Male Characters, The Ocelots,
and 8 more

The Ocelots (formerly),
The Blaze Rods

Aiden is a character in Minecraft: Story Mode, who appears as a tertiary antagonist in "The Order of the Stone" and the main antagonist in "Order Up!". He was one of the four members of The Ocelots, a team of builders rival to Jesse's gang. He later forms his own group, The Blaze Rods. He is voiced by Matthew Mercer.

He is the second episodic antagonist of the series, preceding The White Pumpkin, PAMA, Mevia, Hadrian, and Romeo.

Aiden has brown hair, olive green eyes and slightly desaturated white skin (which appears more saturated and red on the Netflix edition), and wears a black leather jacket with the face of an ocelot (two crossed blaze rods in "Order Up!") on it. Under this, he wears a green shirt with yellow buttons similar to Magnus' armor, possibly merchandise. Later in episode five, he wears armor similar to that of a Roman gladiator, which also resembles the arms and legs of Soren's armor.

Aiden can be seen as narcissistic and egotistical. Aiden is rude to Jesse's gang in episode one, with him breaking a block, which led him burning Reuben's dragon costume and determinately destroying Jesse's build. However, in episode four, if Jesse lets Lukas leave on good terms and lets him go after the rest of the Ocelots, Aiden will help Jesse's gang destroy the Wither Storm by distracting it with fireworks. Near the end of episode five, if Jesse leads Aiden to safety, Aiden apologizes for his wrong-doings, and then says he will become a writer and start over. Jesse also has the option to instead throw Aiden over the edge of Sky City, which causes Aiden to still hold his grudge. Throughout episode five, he is shown as manipulative, selfish, bitter, and merciless, (shown when Aiden spawns Ghasts and other Mobs and hurting Lukas(determinant)) until the very end, in which he shows his true cowardice and determinant repentance for his actions.

"Hey! Who are you calling an idiot?"
—Aiden to Jesse. (Determinant) src

"I don't give a crap about what you think!"
—Aiden to Jesse. (Determinant) src

"Back down and get out of my face, Reggie!"
—Aiden to Reginald. src

"I killed you once and I can do it again!"
—Aiden to Jesse. src

"This was supposed to be my world, and you've ruined it!"
—Aiden to Jesse. src

"It just drives you crazy to see someone else succeed, doesn't it?!"
—Aiden to Jesse. src

"Oh uh Hi Jesse I'm so sorry. So sorry to cause all that trouble."
—Aiden to Jesse if they took him. src

"STOP IGNORING ME!"
— Aiden to Jesse if Jesse chooses to walk away. (Determinant) src

"Well, if it isn't team trash bag! How was your stupid pig? I heard intense heat causes brain damage."
—Aiden to Jesse at EnderCon about Reuben (Pig)'s incident. src

Aiden with Maya and Gill.

Aiden just after he just punched the stone, allowing the lava to flow. 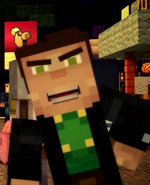 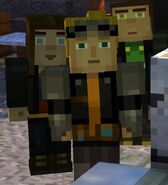 Aiden taunting the New Order of The Stone.

Aiden and The Blaze Rods fighting the New Order of The Stone.

Aiden and a Creeper Spawn Egg. 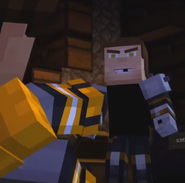 Aiden after Jesse knocks his tooth out. (Determinant)

Aiden in Sky City during Episode 5.

Aiden at his surrender.