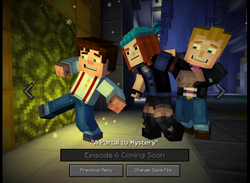 "Access Denied"
"A Portal to Mystery" is the sixth episode of Minecraft: Story Mode. It was released on June 7th, 2016.

Continuing their journey through the portal hallway, Jesse and crew land themselves in another strange new world - one completely overrun by zombies. With a timely invitation to take refuge in a spooky mansion, they find themselves thrown into a thrilling mystery alongside famous members of the Minecraft community.

Did you show the Flint & Steel to CaptainSparklez?

Who did you accuse after dinner?

Did you lend a helping hand or go after The White Pumpkin?

Did you convince the others about Cassie Rose?

How did you leave Cassie Rose?