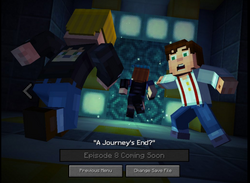 "Hero in Residence"
"A Journey's End?" is the eighth episode of Minecraft: Story Mode, and the final episode of the Adventure Pass. It was released on September 13th, 2016.

For the full plot, go here.

Having survived supernatural storms, maniacs in mansions, malevolent intelligence, and more, Jesse’s crew have one last and potentially lethal trial before they can find their way back through the Portal Corridor. In their haste to obtain the Atlas, our heroes find themselves stumbling into the midst of a deadly tournament, in which people are forced to Spleef for their very lives, or else find themselves cracking quartz in the mines.

What strange rules define The Games? Who are the mysterious trio who run them? Will Jesse and co even make it to the finish line alive?

Who did you rescue during Extreme Spleef?

Did you make a deal with Emily or not in Lava Race?

How did you finish the Lava Race?

How did you deal with Hadrian in his palace?

Where did Emily go in the end? 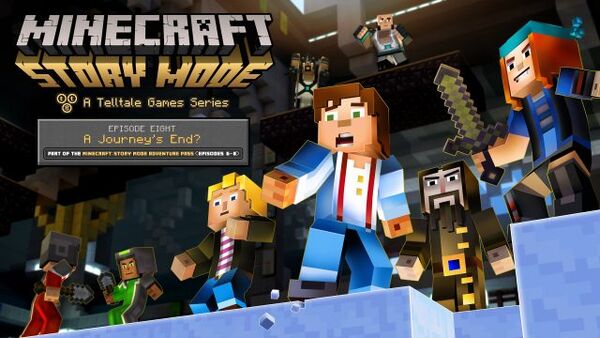